Puglia is a treasure chest of art, history and nature. It’s the land of sun and hospitality. The land in which the past is wedded to the present and ancient popular and religious traditions are maintained. Puglia, situated in the southeastern tip of Italy in the heart of the Mediterranean, offers over 800km of coastline marked with golden beaches and stunning cliffs. Whereas inland, open plains and gentle hills are nature’s unspoiled kingdom, and olive groves and vineyards alternate with luxuriant forests.

Surrounded by the green of centuries-old olive trees and by the blue of the Adriatic Sea, Monopoli is the perfect encapsulation of a holiday in Puglia. Monopoli, a municipality of the province of Bari, is one of the most heavily populated centres in the region, and will amaze you with its colours, its flavours and its cultural treasures. It is impossible to visit Monopoli without diving into its crystalline waters. The coastline stretches for about 13km and is mainly characterised by low-lying coastal areas indented with a succession of small coves and wide expanses of sand. Its beaches are amongst the most beautiful in the province and every year its crystal-clear waters attract both Italian and foreign tourists.

What to Visit in Monopoli

Monopoli is rich in evidence of various eras: Roman (Egnazia), Byzantine (rock frescoes), Lombard, Norman (farmhouses, manor farms, fortresses) and Spanish (Castle of Carlo V). The historic town centre is not to be missed, a hub of alleyways and stone houses, rich in precious artistic treasures. Small squares, bell towers, ancient churches and restaurants characterise the historic heart of Monopoli, announced by the profile of the Castle of Carlo V and by the ancient city walls which look out onto the blue of the sea. SPalazzo Martinelli and the Cathedral of Maria SS della Madia are also picturesque. Not to be missed is the Feast of the Madonna della Madia (December 16 and August 14) which every year re-evokes the episode of the landing of the boat bringing back the Madonna of the people of Monopoli.

Thanks to its favourable location, Monopoli is an excellent intermediate stopover point between the provinces of Bari and Brindisi. For those who want to visit Puglia’s capital city, the distance between Monopoli and Bari is about 40km (about 45 minutes by car). Monopoli can be a starting point for visiting the trulli of Alberobello and the caves of Castellana, which are only 15km from the centre of the city. The beautiful town of Polignano a Mare is only 15 minutes away. From Monopoli you can also reach the municipalities of the Valle d’Itria, such as Locorotondo and Martina Franca, which are perfect for a food and wine tour. Heading towards the area around Brindisi, from Monopoli it’s easy to reach Ostuni, the renowned white city, and Fasano, a city full of attractions for families thanks to its beaches and the famous Zoo Safari. Right near Fasano, at Savelletri, you will find the archaeological site of Egnazia, which also includes a museum. 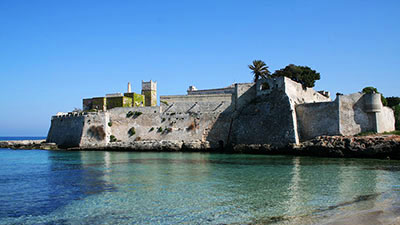 Camping Santo Stefano is in Monopoli (Italy), about 35km south of Bari, on the shores of the Adriatic Sea.